Sidemount diving is a way to assemble scuba equipment so that the tank(s) are worn on the diver’s sides instead of their back.

It typically involves two cylinders, although sidemounting a single cylinder or a rebreather is also possible and becoming popular. This reduces the diver’s vertical profile significantly, but it increases the diver’s horizontal profile slightly.

Advantages to diving in sidemount:

Streamlining: The entire sidemount system is designed to be completely streamlined.  Sidemount mentality is typically one that involves a minimalist approach, so BCDs and harnesses tend to have smaller profile (but same functionality) than typical backmount equipment.

Comfort: Your back is much more flexible in sidemount since there is nothing rigid (tank or backplate) held against it.  This greatly increases comfort during dives.  Cylinders can also easily be donned in the water eliminating the need to walk around with heavy dive equipment on.  Sidemount has made diving for some people with disabilities and or injuries much easier since all the heavy equipment can be donned in the water.

Safety: With two completely independent cylinders and regulators, sidemount provides a redundant system and much safer gas management.  All valves and regulators are directly in front of you so they are easier to manage.  A faulty regulator or tank becomes a minor problem instead of a major emergency.  Complete gas loss is practically impossible.

Versatile: Alongside further training and some additional equipment, the same BCD and Harness can be used in other applications such as technical, wreck, and cave diving.

Lightweight: Gear is typically lighter and less bulky making it ideal for travel and loading.  This also makes getting into small boats and/or back to shore much easier. 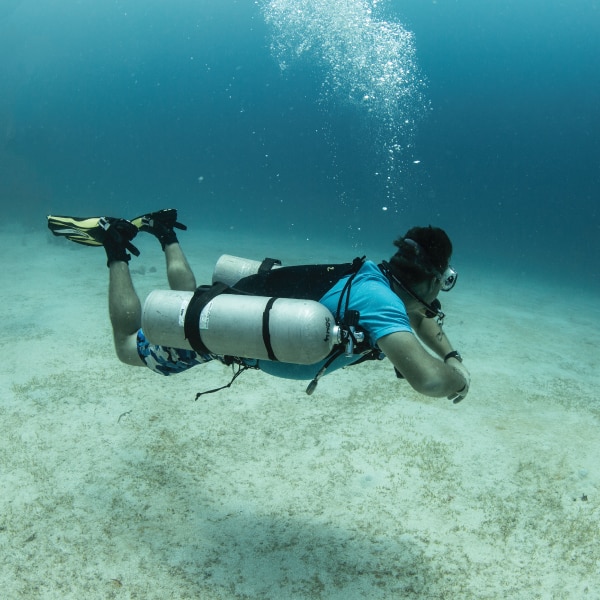 “If you want to meet nice people and experience the right balance of responsible education and having a good time, then there’s no way past the UDC.…”

We offer accommodation with all our recreational courses at the Mango Inn resort.  The Mango Inn is away from the main settlement of Utila in quiet gardens, yet is only a few minutes walk from all amenities and conveniences should you need to procure any items or accessories.   Outside the rooms you are surrounded by luscious gardens with accommodation, freshwater training pool, and restaurant a few steps away. The tranquil gardens of the Mango Inn are the perfect location in this tropical paradise for a low stress learning environment, and you are no more than a 10 minute walk to our dive center.